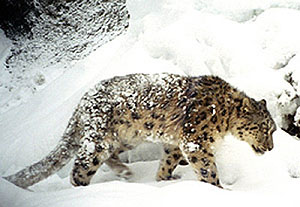 While SLIMS (Snow Leopard Information System) sign surveys can be improved through better training and use of sophisticated sampling regimes (see Occupancy Surveys), the relationship between the amount of sign present and the number of cats in the same area is just too variable and imprecise to produce consistent or sufficiently reliable results.

For these and other reasons, the Snow Leopard Conservancy pioneered the use of non-invasive, remotely-triggered camera “traps” for photographically “capturing” this seldom-seen carnivore. Ullas Karanth of the Wildlife Conservation Society was the first to use remote cameras to census tigers in India. But no-one had attempted this technique under the harsh conditions of Himalayan winters, or on a species whose elusiveness is so legendary.

Cameras are set where a snow leopard would be expected to visit; the camera automatically takes the image of any warm-bodied animal that happens to pass by. While some cameras use white or incandescent flash at night, others record pictures using only infra-red light which is invisible to many animals. The latest devices operate in sub-zero temperatures, and can be left unattended for weeks or even months at a time while the supervising scientist is miles away in the comfort or his/her home or office! Camera traps enable researchers and conservationists to accurately establish population size, identify resident cats or track specific individuals over extended periods of time within the camera-trapped area.

Initially, with older-model cameras that take only one or several photos, we deployed two cameras at each location, in order to photograph the snow leopard from both sides. As each snow leopard has its own unique pelage pattern (see below), views of the left and right sides are needed to identify a cat at the first “capture.” Now, with the latest digital cameras capable of recording an image every second or less, a single camera may be able to record both sides of a snow leopard as it moves about investigating a scrape or scent-mark.

Back in the office, the scientist carefully examines each image, matching the leopard’s spotting pattern against a photo library of animals whose identity is known from pictures taken earlier in the survey or from previous surveys. Identifying different snow leopards is most easily accomplished by comparing the rosette and spot patterns along each flank or side of the body; the more images one has to work with the better.

“Capture-mark-recapture” algorithms and computers are used to estimate the number of snow leopards present within the area surveyed. But since each snow leopard has its own distinctive pelage “fingerprint,” there is no need to physically capture or artificially mark animals for future recognition. This makes camera trapping highly non-invasive compared to radio-collaring.

There are two kinds of camera traps. The first uses active infrared technology, where a transmitter placed on one side of a trail sends out a beam of infrared light (which cannot be seen by people or snow leopards) to a receiver located several meters away on the other side of the trail. When this invisible beam is broken, the receiver electronically signals one (or more) cameras to take a picture. Like Dr. Karanth’s work with tigers, we used TrailMaster® TM cameras in India and Mongolia on snow leopards.

The other kind of detection system is known as passive infrared: a single camera is linked to a detector which is constantly scanning the immediately surroundings for sources of infrared energy which warm-bodied animals emit as their body heat radiates out into the environment. When the sensor detects both heat and movement, it instructs the camera to take a picture. Unfortunately, passive infrared cameras may also be triggered when heated rocks send out wafts of warm air!

Digital camera traps are rapidly replacing film cameras. New, faster and less invasive infra-red cameras like the Reconyx RapidFire©, Scoutguard SG 550V© or Bushnell Trophy Cam© are capable of capturing their first image within a second or less. They can also be set to record video or capture consecutive images seconds apart. Many hundreds, even thousands of pictures can be stored on a single memory card, making fast data collection routine. As noted, rapid image acquisition helps eliminate the need to deploy two cameras at each site, since snow leopards will often turn around while scraping or scent-marking, thus displaying both sides of their bodies to a single camera trap.

For more on camera trapping of snow leopards, download the following papers here: